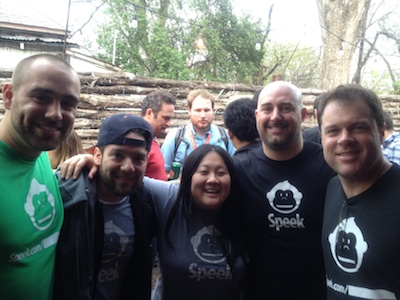 It all started on a plane eight months ago. Speek CTO Danny Boice had no idea that a casual chat with Startup America CEO Scott Case would lead to his startup’s biggest deal to date. (Tiny peanuts is the new power lunch.)

Ashburn, Va.-based Speek announced today that it’s the only conference calling app available on Dell’s marketplace, where millions of business users come for discounted services and products. Danny (second from right) says it’ll be a game changer for the two-year-old startup: Not only does it make the app available to 10 million business and government users, but a partnership with a Fortune 50 company opens doors to other corporate partnerships, which is what Speek is now focused on. And getting investor attention for the series A round it plans to raise in the next few months just got a little easier. The Speek team here includes Konrad Waliszewski, Chris Rodriguez (former employee), Virginia Lee, Danny, and John Bracken.

So how did it all happen? At the end of his chat with Scott, who also co-founded Priceline, he asked how he could help the business. Knowing Scott had some Dell connections and that much of Speek’s system is built using Dell hardware, Danny wondered if he could help the startup get a line of credit through Dell or some kind of special attention given how much equipment it regularly orders. Scott offered something better: an intro to Ingrid Vanderveldt, Dell’s entrepreneur-in-residence and founder of its Center for Entrepreneurs. At the time, she was starting an invite-only club at Dell for founders of companies and Danny got invited after Scott’s suggestion. He spent months going to Dell events and getting intros to its execs. Dell even bought some premium Speek subscriptions to use for its own conference calls. Meeting the right Dell biz dev and marketing people led to the partnership.

In an interesting twist, actor Ed Norton also became a Speek fan, proclaiming his love for the service to his 2 million Twitter followers last week. How did that happen? The startup tracks its users and realized Ed was one of them. Since then, Speek has forged a strong relationship with Ed, who talks to the exec team a few times a week and occasionally meets with Danny in New York over coffee. Danny says Ed’s tweet doubled Speek’s registrations in one day. This week will put the conference call technology to the test as many of those new customers will start using it. It’s also the week that Dell starts actively promoting its marketplace. Lessons learned: Be creative and tenacious and work your relationships. (Bigger lesson. Re-watch Keeping the Faith. It holds up.)

CLICK HERE FOR THE REST OF: “Best Week Ever for a DC Startup”